A Symbol of San Diego

Explore One of the Country’s Finest Urban Cultural Parks

Balboa Park is home to gorgeous gardens, lovely walking paths, and numerous cultural gems. Uncover historical and architectural treasures from the Founder’s Statues, Alcazar and Zoro Gardens, to the Spanish Village Art Center and much more. Keep your camera ready as there are incredible sights around every corner. You’ll get a full overview of Balboa Park and its rich history on this walking tour, uncovering how Balboa Park has become a symbol of San Diego.

From peacetime to wartime, learn about the world events that changed Balboa Park

Sip a beverage and shop for one-of-a-kind artwork

Next to Founder’s Plaza Statues, between 6th Ave and Balboa Drive on Laurel Street at the west entrance of Balboa Park. They are located in Sefton Plaza and are directly across the street from the Lawn Bowling Club. 698 El Prado, San Diego, CA 92103

Your guide has a passion for sharing knowledge. If you have a particular area of interest, please let us know and we can try to accommodate with additional information.

What’s In Store For YOU 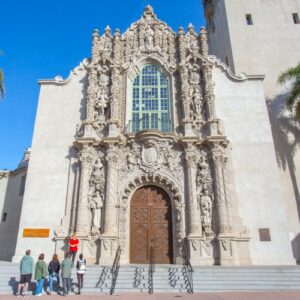 We’ll kick off this San Diego experience at the Founder’s Statues on the west side of the park. We think you’ll agree San Diegans were visionaries when they set aside 1400 acres of land for the park all the way back in 1868.

Next we’ll stop at the California Tower, built for the 1915 Panama-California Exposition. The face of the tower depicts the early history of the city, and the tower itself is a city landmark.

Then we’ll head to Alcazar Garden, which was inspired by the same-named gardens in Spain. Used for both the 1915 and 1935 expositions, the garden offered fair-goers a respite from the hustle and bustle of the exposition, and it provides a picturesque foreground to photos of the California Tower. Don’t worry, we’ll help you snag the perfect Instagram shot.

Afterwards, we’ll head to the Old Globe Theater which is a Tony Award-winning, world-renowned professional theater group modeled after The Globe Theatre, London.

From there, we’ll walk through the heart of the Prado, where we spot unique building façades.

We’ll also check out Zoro Gardens, a sunken garden that was once a nudist colony (seriously) during the 1935 California Pacific International Exposition. Today, it’s a butterfly garden that contains everything butterflies need for their life cycle.

Next, we’ll pop into the Spanish Village Art Center to observe artists at work in their studios.

By now you will have worked up a thirst so we’ll grab a drink at a local coffee cart, Daniel’s Coffee Cart(opens in a new tab), 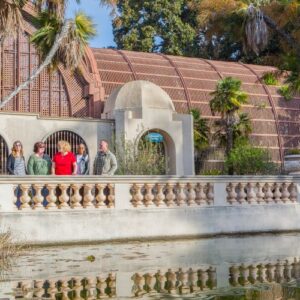 before continuing past one of the largest Moreton Bay fig trees in California.

But we’re not done yet! We’ll then head to the Botanical Building, the largest wooden lath roofed building when completed in 1915 (closed for restoration until 2023). It’s the perfect stop for photographers and flower-lovers alike, and the adjacent lily pond full of koi makes more than just a pretty picture — you’ll learn how the pond was an important part of the war effort during WWI and how it helped injured sailors and soldiers during WWII.

Our tour will end at the Plaza de Panama, but before we say goodbye, your guide will give you directions to the nearby Visitor Center (for snacks, maps, souvenirs, and museum passes), suggestions for places to eat, and tips on what else to see and do within the park.

Hear From Our Customers!

Jennifer was an excellent tour guide & the secret coffee drink was fabulous! I even got to do a bit of shopping along the way:)

We had an excellent time touring Balboa Park. Jennifer was informative, smart, witty, and FUN! Highly recommend this tour. Jennifer is the best!

Jennifer gave us an excellent tour of beautiful Balboa Park! A wealth of knowledge and recommendations, she led an informative tour that was a great start to our San Diego adventure. Would highly recommend going on her tour versus wandering the park on your own. There is so much to learn and so many things you’d miss without a guide in the park. Thanks, Jennifer!

We had a wonderful tour of Balboa Park with Jennifer. She was so knowledgeable and fun. I’ve been to the park many times but had no idea about its history, architecture and its founders. Jennifer told us wonderful stories about the park from the last 150 years. We had a fantastic visit and can’t wait to try one her other tours.

Fun way to learn about the history of Balboa Park. Our guide Jen was very knowledgeable, friendly, and fun. We enjoyed talking with the other people on our tour, too.

A nice addition to the walk was our complimentary beverage at a coffee cart. Hot chocolate and fancy coffees were available.

Explore Our Other Walking Tours

Liberty Station: From Barracks to Brews